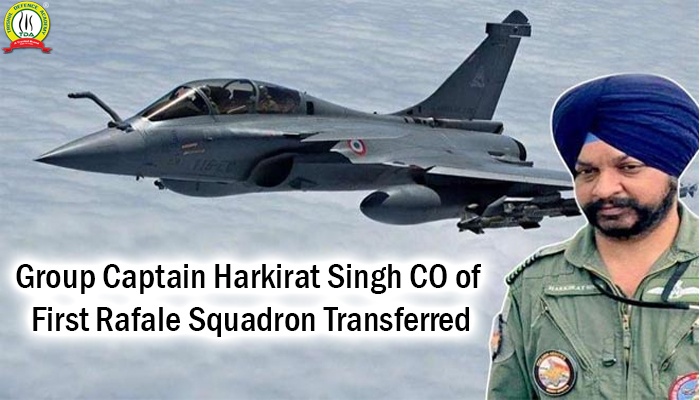 MUMBAI: In a move that has raised eyebrows, IAF has transferred the commanding officer (CO) of the first Rafale fighter squadron to the headquarters of the Eastern Air Command (EAC) at Shillong. According to a press communiqué issued by IAF, “Group Captain Harkirat Singh has been transferred and Group Captain Rohit Kataria will be the new CO of the 17 ‘Golden Arrows’ Squadron at the Ambala airbase. However, the move has its fair of controversy with IAF officials on the condition of anonymity questioning the transfer of Group Captain Harkirat Singh who has been shunted out within six-seven months.

However, the Public Relation Officer, Ministry of Defence maintains that the transfer is part of regular exercise and expertise of Group Captain Harkirat Singh with the Rafale induction at Ambala is planned to be utilized for a similar induction in the EAC.

The Indian Air Force is set to raise the second unit of the Rafale battle jets in mid-April and it will be situated in Hasimara airbase in West Bengal, the sources said. The main group of five Rafale jets showed up in India on July 29 last, almost four years after India consented to an arrangement with France to obtain 36 of the airplane at an expense of Rs 59,000 crore. The second group of three Rafale jets showed up in India on November 3 while the third cluster of another three planes joined the IAF on January 27. The sources said the second Rafale group is being raised at the following primary working base (MOB) in Hasimara in mid-April this year. India is relied upon to get more Rafale jets from France in two or three months. The Rafale jets are India’s first significant military aircraft after the Sukhoi jets. The Rafale jets are equipped for conveying a scope of intense weapons. European rocket creator MBDA’s Meteor past visual reach aerial rocket, Scalp journey rocket, and MICA weapons framework will be the pillar of the weapons bundle of the Rafale jets. The IAF is likewise securing another age medium-range secluded air-to-ground weapon framework, Hammer, to coordinate with the Rafale jets.