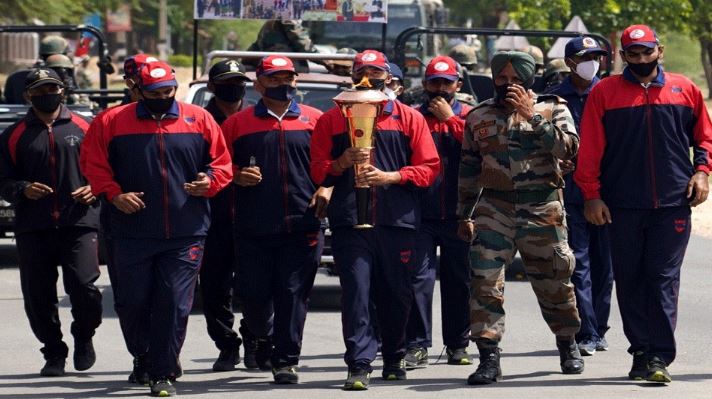 The golden victory torch, marking India’s victory in the Indo-Pakistani War of 1971, reached Nasirabad in Ajmer today. With full military honours, this torch was received by the executive officer of Nasirabad Cantonment Board.

On this occasion, a program was also organized at Nasirabad Sainik Cantonment, where the families of the soldiers who were martyred in the Indo-Pakistani War of 1971 were honored by the Indian Army.

India is celebrating the Golden Victory Year on this occasion in the joy of India’s victory in the Indo-Pak war and the creation of Bangladesh. To commemorate this glorious moment, four golden victory torches were handed over to the Indian Army by Prime Minister Narendra Modi at a function held in Delhi on 16 December. Out of these, when the torch of the western region reached Nasirabad today, the enthusiasm of the citizens of the city along with the soldiers of the Indian Army was created.

With full respect, this torch was first handed over to the EO of the Cantonment Board at the Nasirabad entrance. It was then taken to the Sainik Cantonment via the main roads of Nasirabad, where a ceremony was organized in the chief hospitality of Brigadier S. This torch was installed at the venue amidst the melodious voices of the pipe band. On this occasion, the families of those martyred soldiers were also honored by Station Commander Brigadier S Kaushal, who had given martyrdom in the Indo-Pakistani War of 1971.

Significantly, the Indo-Pakistan war of 1971 is considered important in many ways. This was the first time since the Second World War that the shortest and fastest war in military history took place. In this, 92,000 soldiers and officers of Pakistan had to surrender. As a result of this war, Bangladesh was created by dividing Pakistan into two parts. On the occasion of completion of fifty years of this victory, this year has been declared by the Government of India as Golden Victory Year.