Paramilitary Force Ex-serviceman CISF Vacancies: Better employment opportunities in paramilitary forces are going to open for ex-servicemen who have retired from the Indian Army. This special scheme of the Ministry of Home Affairs has been started from CISF.

The benefits of these CISF recruitments will be available to only those applicants who have retired from the army. Such applicants, who are currently serving in the army and are going to retire soon, will not be able to get the benefit of these recruitments.

Under the ambitious plan of the Ministry of Home Affairs, preparations are being made to divide the entire security system of CISF into core and non-core areas. Under the plan, specially trained personnel and officers of CISF will be deployed in the core area.

What Should Be Thought Process Of First Time Defence Aspirants ?

If this scheme of the Ministry of Home Affairs is successful, then huge opportunities will be available for ex-servicemen in CISF. In fact, for the past few years, the management of units coming under CISF’s security has been expressing concern about the rising cost of security.

Since then, the Ministry of Home Affairs was considering dividing the security of CISF into core and non-core. Now the idea has started to be implemented. Whose, the biggest benefit of which is going to be given to the ex-servicemen at the moment. At present, CISF is preparing to deploy ex-servicemen in all other units except airport and vulnerable units.

Under the scheme, a two-year contract will be done with the ex-servicemen initially recruited in the CISF. After two years, their work will be reviewed.

If everything is found to be fine in the review, then their contract will be renewed again. Apart from this, barrack facility will also be made available to the ex-servicemen in the duty unit. While serving in CISF, ex-servicemen will also be entitled to get all the benefits they would get after retirement from the Indian Army. 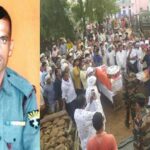