Encounter continues between security forces and terrorists in Shopian, One terrorist killed | Best Defence Coaching Skip to the content 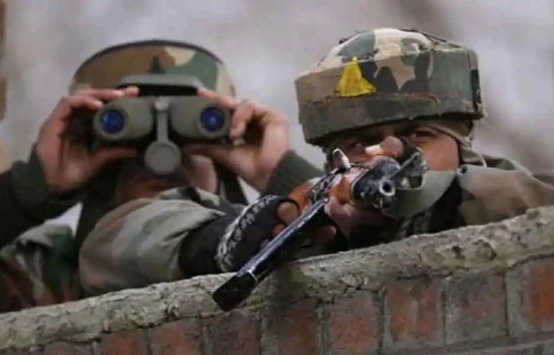 An encounter is going on between security forces and terrorists in Hanjipora area of ​​Shopian district of Jammu and Kashmir. It is being told that after getting information about the hiding of the terrorists, the security forces have started action and a fast search operation is being conducted. Army and Jammu and Kashmir Police is running a joint operation in Kachdura area of ​​Hanjipora.

A terrorist has been killed in an encounter by security forces in Hanjipora of Shopian district. It is being told that information was received about the hiding of two to three terrorists in the area. After this, the soldiers surrounded the entire area and taking action, started the operation in the area. When the security forces conducted a search operation in the area, firing was started from the hidden terrorists. After this the soldiers also responded.

Two days ago, a terrorist was killed by the security forces in Shirmal of Shopian in the Kashmir Valley. Earlier on Monday, terrorists opened fire on the Naka party of CRPF in Babapora area of ​​Jainapora in Shopian district of Jammu and Kashmir. However, there was no casualty in this attack. CRPF personnel said that as soon as the CRPF patrol party was attacked by the militants in Jainapora Shopian, the CRPF personnel retaliated for some time and the firing continued from both the sides, but the terrorists managed to escape from the spot.

Police Inspector Parvez Ahmed Dar was martyred in a terrorist attack on Tuesday night in Kanipora, Nowgam. Inspector posted in Counter Intelligence Kashmir was going to the mosque to offer Namaz. According to the police, two terrorists were involved in the attack. The CCTV footage showed that the two had already ambushed and as they approached the mosque, they opened fire from behind with a pistol.