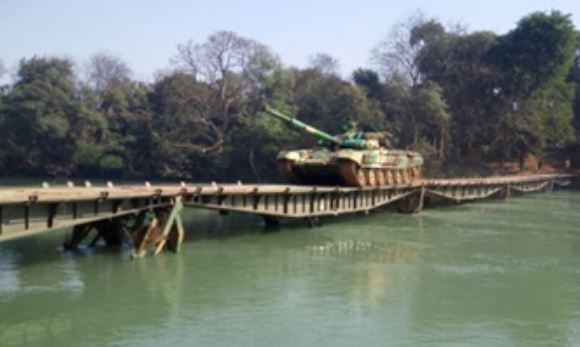 The first production lot of 12 Short Span Bridging System (SSBS)-10 meters, designed and developed by the Defense Research and Development Organization (DRDO), has been inducted into the Indian Army by Chief of the Army Staff, General MM Naravane. Dr G Satheesh Reddy, Secretary, Department of Defense Research and Development and Chairman, DRDO were also present in the event organized at Cariappa Parade Ground, Delhi Cantt.

The SSBS-10 meter as a single span plays a vital role in bridging the gap up to 9.5 metres, providing a 4 meter wide, fully ornamented roadway, ensuring faster movement of troops. R&D Establishment (Engineering) Pune, a premier engineering laboratory of DRDO, has designed and developed the system in collaboration with M/s L&T Limited. The 12 bridge is part of 102 SSBS-10 meters from M/s L&T Limited, which is the production agency.

With the help of these bridges, the army will no longer face difficulties in crossing small rivers and canals. These bridges will prove to be more helpful especially on the western border. These bridges can be easily moved from one place to another. This will help in quick deployment of troops.

This bridging system is compatible with universal bridging systems (75 m) where gaps less than 9.5 m are required to be covered in the end span. The deployed bridge is of a load classification of MLC 70. This system will help in quick movement of troops and increase the mobility of resources.

Defense Minister Rajnath Singh has congratulated DRDO, Indian Army and Industry on the successful development and induction of this system. He said that this induction will give a boost to the fast growing Indian defense industrial ecosystem and help the industry to contribute towards ‘Self-reliant India’. Dr G Satheesh Reddy, Chairman, DRDO congratulated the teams involved in the successful development and induction of this bridging system into the Indian Army.