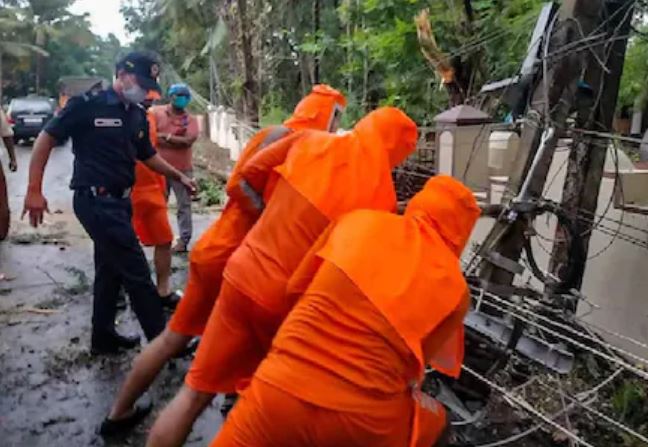 Cyclone Tauktae, rising from the Arabian Sea, is rapidly moving towards Gujarat. Right now, this storm is about 200 km from Mumbai and 400 km from Gujarat. Meanwhile, big news is coming from Mumbai. At least 273 people are stranded on a flowing boat near Heera Oilfields at Bombay High Field, about 175 km from Mumbai. On receiving the information of immediate help from their side, the Indian Navy has sent two ships INS Kochi and INS Talwar on the spot for rescue. The ships are expected to reach the oilfield by late afternoon.

According to the information, other ships and aircraft are also being prepared to go there for rescue. These cyclones are trying to reach the spot as soon as possible for search and rescue operations in the area surrounded by touts. 12 teams have been deployed in entire Maharashtra including three NDRF teams in Mumbai to deal with the storm.

On the other hand, Mumbai’s Chhatrapati Shivaji Maharaj International Airport has shut down all operations for 3 hours from 11 am to 2 pm on Monday due to the threats posed by the severe cyclone tout. This led to at least 3 inbound flights of private airlines diverted to less turbulent locations.

A SpiceJet service was diverted to Surat. One IndiGo flight has returned to Lucknow, while another IndiGo service has been diverted to Hyderabad. An official spokesperson said that the CSMIA needed to be shut down in view of the alert on the cyclone.