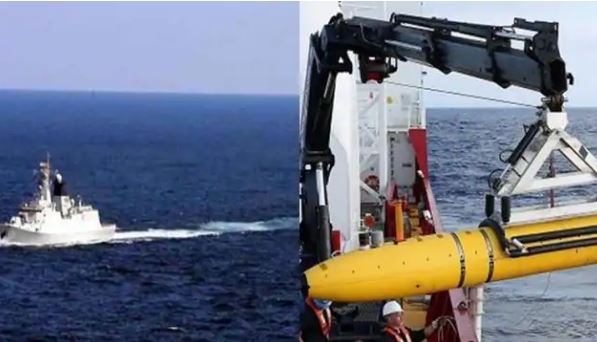 China’s trickery with its neighbouring countries, including India, is not hidden from anyone. Due to this, the dragon has received reprimand from many countries. After badly defeating the Indian Army in eastern Ladakh, China is now embarking on another conspiracy against India. Indeed, China has deployed a fleet of underwater drones in the Indian Ocean. It can operate for months and deliver intelligence to the Navy. These water drones are named Sea Wing (Hei) gliders. Defence analyst H.E. Sutton has claimed this.

Writing for the prestigious Forbes magazine, Sutton stated that these sea gliders, which the Chinese are deploying ‘en masse’, are a type of uncredited underwater vehicle (UUV). It had done more than 3,400 observations till February.

Citing government sessions, Sutton said these gliders were exactly the same as the US Navy deployed and seized by Beijing in 2016. Sutton wrote, “It is quite surprising that China is now deploying this type of UUV N mask in the Indian Ocean. China has also deployed the C Wing in an ice breaker in the Arctic.” According to the December report last year, 14 were deployed in the Indian Ocean mission, but only 12 could be used.

Sutton said these gliders have large wings, which can last longer. However, the gliders are not fast or agile but are deployed for long-range missions. The defence analyst further stated that these Chinese gliders are collecting oceanographic data. They are used to provide intelligence for the Navy.

Given the increasing challenges in the Indo-Pacific region, Chief of Defense Staff General Bipin Rawat said earlier this month that the world was looking at strategic locations in the Indian Ocean Region (IOR). He had said, “More than 120 warships of forces from countries other than the region are stationed in the Indian Ocean right now and in view of the increasing global interest in the region, the competition for strategic bases there is going to increase further.”

General Bipin Rawat had said that in recent years as China’s economy and military size have increased, its influence in the region has also increased, which has attracted considerable attention. He said that India would need to emphasize on strengthening its relations with groups such as Japan-Australia-India and the Organization of Southeast Asian Nations (ASEAN), so that it could fulfil its strategic interests.