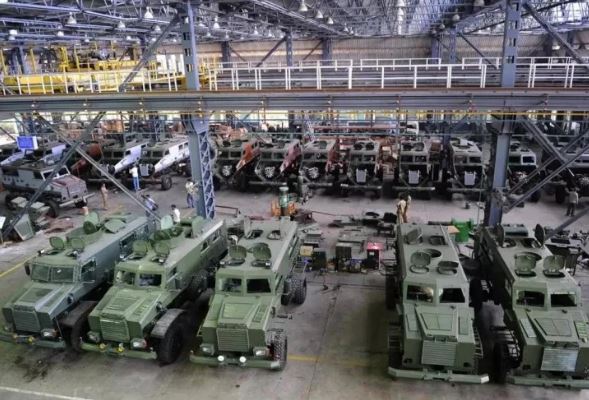 In a meeting of the Union Cabinet held on June 16, the 220-year-old Ordnance Factories, called the Fourth Arm of Indian Defense, were divided into seven companies in one stroke. These are the same factories which supplied equipment to the Indian Army in the war with Pakistan, Bangladesh Liberation War, Battle of Kargil and skirmishes in Ladakh. C. Sreekumar, general secretary of the All India Defense Employees Federation, said, the government was keeping an eye on these factories for a long time. Today private companies and foreign arms manufacturers are very happy with this decision of the government.

The reason being, these companies were unable to compete with the 41 Ordnance Factories. This move of the government is playing with the strategic skills and management of the Indian defence. As Sreekumar, this decision of the Central Government will prove to be a misleading step in the direction of the preparations for the equipment of the Indian Army.

Four lakh civil personnel of the army and 70 thousand employees working in ordnance factories will burn the effigy of the central government by wearing black badges on June 19. A meeting of employee organizations like AIDEF, INDWF and BPMS is being held on Sunday. An important decision can be taken in this meeting to go on indefinite strike in the ordnance factories.

The Center has termed the decision to convert the ordnance factories into a company as a corrective step. This proposal was pending for almost two decades. Now the reorganization of the Ordnance Factory Board has been approved. Its purpose is to increase the capacity of ordnance factories as well as prepare them for competition. The 41 ordnance factories operating under the board, producing arms and ammunition, have been merged into seven companies.

Union Defense Minister Rajnath Singh has termed this decision as historic. There will be no change in the service conditions of 70,000 employees working in these Ordnance Factories. This decision has been taken with the aim of increasing the defense production of the country. This will meet the defense needs of the country. All the seven companies will be at par with other defense sector undertakings. They will be operated by professional management. This reform initiative is being taken under Prime Minister Narendra Modi’s self-reliant India vision.

AIDEF general secretary Sreekumar says, the central government has converted 220-year-old factories into seven corporations under the guise of the Corona period. This is a foolish move. This will adversely affect the strategy skills and management of the army. When the whole country was fighting against Corona, the central government was preparing to hand over these factories to private hands. Now all the equipment of the army was found under one roof. Now different companies will have to be approached for Indian defense.

The dream of private companies and foreign arms manufacturers has been fulfilled. The government wanted to benefit them. Center converted factories into corporations in the name of Kovid Relief Package. Preparations have been made to hand over the heritage of the country to private hands. Support will be sought from all central government employees’ organizations and political parties against this decision.

The central government is preparing such proposals, how to sell the ordnance factories and their land and end the pension of army personnel. The Finance Ministry had proposed that 50 percent of the money that would come from selling the Ordnance Factory land would be spent on buying military equipment etc. The government will take the rest of the money. However, later this proposal was rejected. The Defense Ministry had said in this regard that OFB i.e. Ordnance Factory Board will be merged with other Public Sector Undertakings (PSUs) of the Ministry of Defense. This is in the interest of OFB as it will provide operational independence and flexibility to OFB. Presently its absence is being felt. There will be adequate sense of security in the decisions taken regarding the interests of the workers.