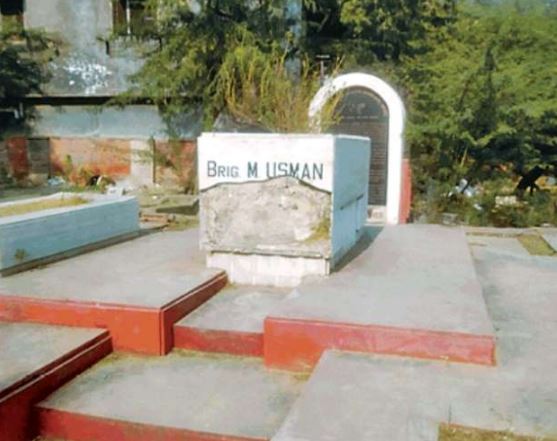 The Indian Army has taken the initiative to repair the infamous tomb of War Hero Brigadier Muhammad Usman located in the Jamia Millia Islamia complex. The army has sent a military man from Nowshera sector to repair the tomb. It is also reported that every year the army repairs the tomb around Brigadier Usman’s Martyrdom Day i.e. July 3 and is honoured by garlanding it. The grave has been maintained by the army for decades. Due to Corona infection this year, wreaths and annual maintenance could not be done on Martyrdom Day.

The military personnel have started repairing the tomb with the help of the Jamia administration since noon on Wednesday. Earlier on the internet media, after the photo of the tomb was broken, the grave was being discussed.

In the video broadcast on the internet media, it is alleged that the tomb of Brigadier Usman was deliberately broken by some mischievous elements. Apart from this, such videos are also trying to present the matter from a communal point of view.

The local police has also investigated the case after receiving a viral video quoting a complaint of sabotage with the tomb. The local police and the Jamia administration have denied the allegations of sabotage. The Jamia administration clarified in this case that there was no sabotage on the tomb. The tomb is dilapidated just for lack of care. Also, on behalf of Jamia, it was told that the tomb falls in their area, but it is the responsibility of the family concerned or the army itself in this particular case. Their responsibility is only to clean and arrange the cemetery.

Brigadier Usman, popularly known as ‘Lion of Nowshera’, led a 50 parachute regiment that liberated two strategic locations of Jammu and Kashmir – Jhangar and Nowshera from Pakistan’s occupation in 1948. He was the highest-ranking military officer to be martyred in this war. The then Prime Minister Pandit Jawaharlal Nehru also attended his last visit.