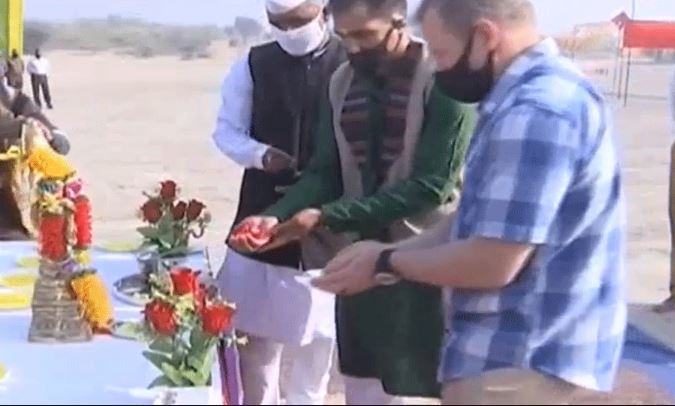 A war exercise is being organized between the Indian Army and the US Army in the Mahajan Field firing range of Bikaner, the largest fire field range in Asia.

In this exercise, which lasts from 8th to 21st, the US Army and the Indian Army are learning the process of destroying the enemies by working together.

At the Mahajan Field Firing Range, both the Indian Army and the US Army offered prayers to Maa Saraswati on the occasion of Basant Panchmi. Indian soldiers introduced the American Army soldiers to their Indian culture, while the people of the US Army were overwhelmed by seeing this culture and culture. On this occasion of Basant Panchami, a pleasant atmosphere was seen in Mahajan Field Firing Range.

After the puja, the soldiers of both the army enjoyed kite flying fiercely. Indian and American Army soldiers took the door pulley in their hands and made their kites walk in the sky. At the same time, they showed the same passion for cutting each other’s kites, which is inside them while destroying the enemy. Indian soldiers also tried to make a place in the heart of the US Army with their culture, while at the same time, the American Army did not miss to express its happiness after seeing so much love. After kite flying, the US Army was put on a desert ship Camel. The women soldiers of the US Army also enjoyed a lot. At the same time, to make the atmosphere happy, the US Army also fiercely pounced on the Punjabi songs with the Indian forces.

The USA Army’s PRO Major Sensor Garrison said that the ongoing manoeuvres between the two countries provided an opportunity to share each other’s warfare techniques as well as each other’s culture. He congratulated everyone on the occasion of Basant Panchami.

Major Samir Puri, a US-origin soldier of the US Army, said that he is happy to come to India. Especially because of the knowledge of the language of both the countries, I am facilitated in learning, although the aim of this joint exercise is to learn each other’s battle skills but such events prove effective in understanding each other’s culture.