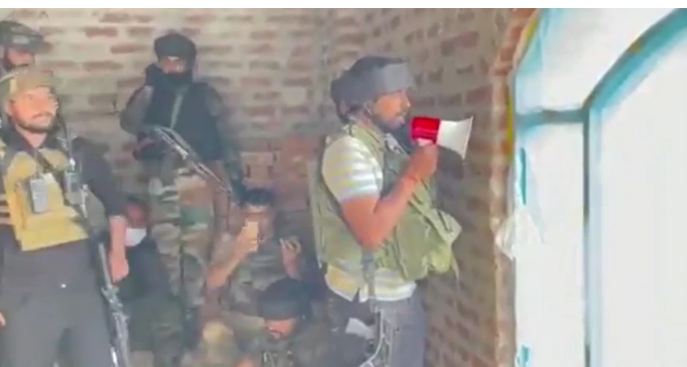 Operation Hanjipora : Indian Army, which sends terrorists to hell, is also adept at making them surrender. On Friday, a similar case came to light in Hanjipora area of ​​Shopian district of South Kashmir, where the terrorist surrendered due to the intelligence of the army.

The army has also shared a video of it on its official social media account. In fact, a terrorist was killed in an encounter with security forces in Hanjipora area and his accomplice had gone into hiding, which the army personnel agreed to surrender.

Army personnel present on the spot referred the terrorist to his family and friends, after which he surrendered with an AK-56 rifle. According to the police, the search operation was launched on the basis of information about the presence of terrorists of the terrorist organization Lashkar-e-Taiba.

A precious life from #Shopian was saved today, when a misguided youth who had recently joined LeT, surrendered during Op Hanjipora#IndianArmy remains steadfast in its commitment to accept surrenders of local youth, who want to shun violence and return to the national mainstream. https://t.co/wIGFFD6mlp pic.twitter.com/o33v9O0Bw7

As the security forces reached the spot where the terrorists were hiding, they opened fire, following which the encounter started. During this one terrorist was killed and the other hid there.

An army contingent was also involved in this encounter. After laying siege to the area, the army jawan appealed to the other terrorist to surrender. The jawan told the terrorist that if he leaves the weapon and comes out, nothing will happen. The army also referred the terrorist to his family and friends.

The army said, ‘Think about your family members, think about the consequences of your partner, what will happen to your family after you leave, think about it’. After such a passionate appeal of the army, the terrorist surrendered.