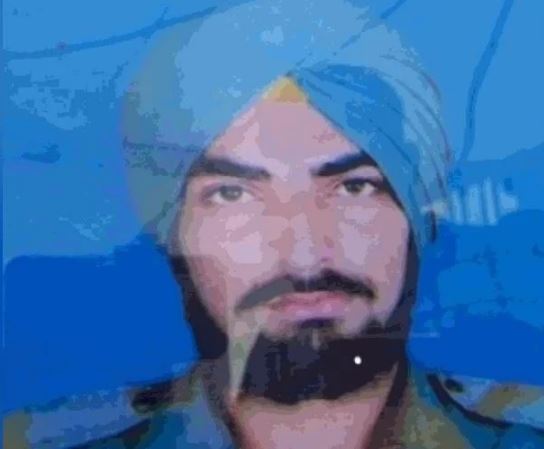 Army Jawan Prabhjot Singh of Buda Gujjar village of Muktsar was martyred during a military exercise in Mahajan field range of Suratgarh, Rajasthan. On Sunday, a large number of people gathered in the last yatra at the soldier’s native village and bid farewell to the jawan with moist eyes. His body was cremated with military honours. It is noteworthy that the soldier was married only about five months ago.

It is worth mentioning that 27-year-old Prabhjot Singh son of village Buda Gujjar, Hardeep Singh had joined the army about six years ago. At 11 am on Saturday morning, he was doing military exercises along with his colleagues at Mahajan Field Range in Suratgarh. During this, an accident occurred due to a cannon and shell explosion and Prabhjot was martyred. The body of the jawan was brought to the native village of Buda Gujjar, where a wave of mourning spread throughout the village.

Soldiers salute at the funeral. SDM Swarnjit Kaur reached the spot and consoled the family members of the soldier. Prabhjot got married about five months back. The soldier also has a younger sister. Subedar Fateh Singh told that Prabhjot Singh was a very brave soldier.

Even after the accident, Prabhjot was very spirited and he kept saying that nothing would happen despite his injuries. He assured that if the soldier’s family faces any problem, he will support the family at all times.

Ramesh Kumar, in charge of Mahajan Field Range, said that two soldiers were injured in this incident at around 11 am on Saturday, who were taken by army helicopter to Suratgarh hospital, where later Prabhjot was martyred, while the other was injured.