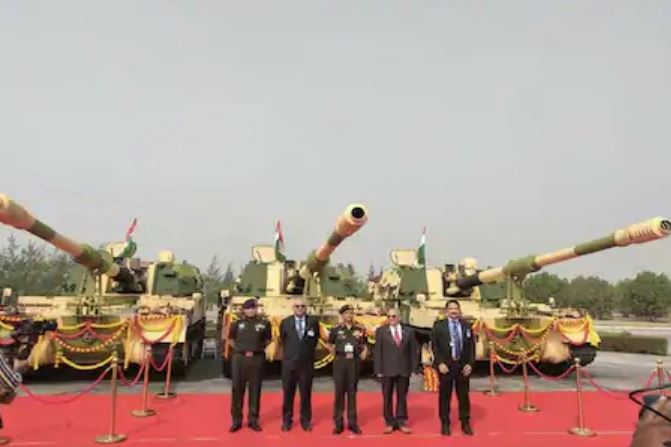 Army Chief General Manoj Mukund Naravane on Thursday inducted the last 100 K-9 Vajra cannon into the Indian Army. These three howitzer cannons have been deployed on the high hills of Ladakh in view of the test. These cannons have come to Leh only on 17 February, from where it will be taken to high altitude area for testing, so that this weapon can be used against enemies even in such places. The news agency ANI was quoted by top government sources on Thursday.

According to sources, the Army may also consider ordering these howitzer cannons for two to three other regiments for hill expeditions based on performance in the test. The army chief on Thursday visited the manufacturing unit of Larsen & Turbo in Hazira near Surat in Gujarat, where howitzer cannons are being manufactured. The Army Chief is eyeing the entire process from the induction of these cannons in the army to use in the operation.

The Indian Army has ordered the South Korean company to manufacture 100 such guns, which have been included in different regiments of the army for the last two years. Actually the K-9 Vajra Howitzer cannon is the indigenous version of K9 Thunder of South Korea. The Indian Army said that L&T has supplied 100 units of indigenously designed K-9 Vajra-T 155 mm self-propelled cannons.

These tanks have a range of up to 38 km and are being developed by Larsen & Turbo, a Mumbai based company in partnership with a South Korean company. Since the Bofors scandal that rocked the country, the Indian Army has not included a single heavy cannon since 1986.

L&T said in a statement that with the release of the 100th Howitzer cannon, the company has successfully completed the supply of all cannons under the current contract awarded to it by the Ministry of Defense in May 2017. The company said that it has maintained its record of supplying ahead of time. Defense Minister Rajnath Singh flagged off the 51st K-9 Vajra from Hazira in January last year.

As part of its ‘Make-in-India’ initiative, the company had set up a green-field manufacturing and testing facility at its Hazira manufacturing complex near Surat for the production of cannons. In January 2018, Prime Minister Narendra Modi dedicated the ‘Armored System Complex’ to the nation in Hazira.