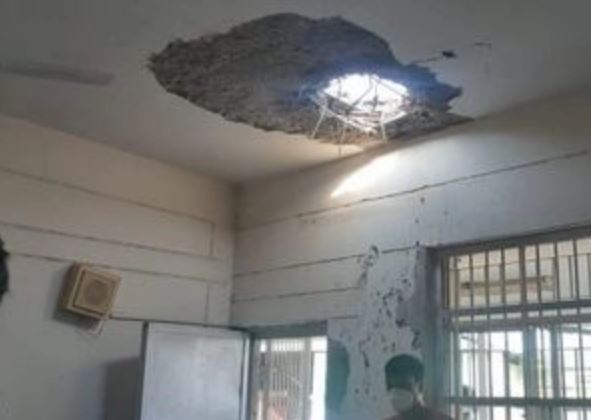 Jammu Drone Attack : For the first time, a drone attack has taken place on any military base in India. Two blasts were carried out targeting the Indian Air Force (IAF) station at Jammu airport. Two employees were injured in the terror attack that took place in the early hours of Sunday. Both the blasts were of low intensity and occurred at a distance of 5 minutes from each other. After this attack, concern has increased about more similar attacks through drones.

Security experts had previously warned about drone strikes. Now there is a demand that India should have arrangements to deal with such drone attacks. The example is being given of Israel, which has an effective air defense system named ‘Iron Dome’.

The challenge for India, which has been a victim of terrorism for a long time, has increased. It is not yet clear what type of drones were used for the attack. However, sources say that this attack was done through common drones available in the market.

They were tampered with to make them capable of carrying an Improvised Explosive Device (IED). Such drones are available in the market for around 20 thousand rupees and can carry a weight of 5-8 kg.

There has been no comment from the Air Force on this matter so far, but the investigation so far has raised suspicion of a drone attack. At the same time, Jammu and Kashmir Police Chief Dilbag Singh said, ‘The attack on the Air Force station was a terrorist attack. Were.

Jammu and Kashmir Police Chief Dilbagh Singh said the police and other agencies are working together to unravel the conspiracy behind the attack. An NIA team has also reached the spot. At present, it is not known from where this drone came and the officials involved in the investigation are trying to trace the air route of both the drones. The air distance between Jammu airport and the international border is 14 kilometres. The Director General of Police said that a major attack was averted.

Meanwhile, Jammu’s Additional Director General of Police (ADG) Mukesh Singh said that the police have arrested a terrorist from near a mall under the jurisdiction of Trikuta Nagar police station, from whose possession an IED weighing 5 kg has been recovered. The accused is said to be associated with Lashkar-e-Taiba. This person was given the responsibility of blasting the IED at a crowded place. Jammu and Kashmir Police Chief Dilbagh Singh said, “The suspect has been detained and is being questioned. Some more suspects are likely to be nabbed in this case.

ammu Drone Attack : Drones have been used before in the world to attack the enemy. The use of drones by Pakistani terrorists for attacks is more worrying. This will save his intelligence agency ISI from any responsibility. Through organizations like Lashkar-e-Taiba and Jaish-e-Mohammed, ISI can conduct drone strikes and it will not even suffer. Without proof, India will not be able to retaliate.

The second motive may be that through these attacks, India is forced to deploy heavy military arrangements in the Kashmir Valley. Drones also do not have to cost much and the result is like a proper terrorist attack. The use of drones is a profitable deal for Pakistan.

So far no concrete progress has been made in this direction. The drones that are available in the market have low radar signal, we do not have its cut right now. The use of expensive missiles to eliminate such drones after surveillance also does not seem rational. According to experts, drones can prove to be a big threat, so arrangements should be made to counter them at the earliest.

First of all, we have to upgrade our military radar systems. They have to be able to track small drones. Heavy security cover or CCTV camera monitoring will not protect against drone attacks. Hi-tech solutions have to be found for this. DRDO is reportedly working on some technology to deal with terrorist drones. After the Jammu attack, the pressure of the Defense Ministry on DRDO should increase.

There is a lack of uniform policy regarding drones in India. In March this year, the government had issued Unmanned Aircraft System Rules. Through these, the use of large and medium-sized drones was approved for delivery. There are about 50,000 drones working in India. The Air Force does have some arrangements to deal with such attacks, but they are not available in the whole country. India is in the process of acquiring the S-400 air defense system but it mainly defends against rockets, missiles and cruise missiles.

How to stop drone attacks? Most experts give the example of Israel, which has an air defense system named ‘Iron Dome’. It is a short-range, surface-to-air air defense system. It consists of a radar and interceptor missiles which are used to neutralize any rocket/missile/aircraft/helicopters/drones.

Israel started using this technology in 2011. Iron Dome consists of three systems that work together. Its radar senses every approaching threat. An all-weather iron dome system is extremely expensive.

According to Air Marshal PK Barbora (Rita), former Vice-Chief of the Waysuna, the system Israel uses is so effective because it knows the launchpads. Israel’s enemies are confined to a small area and fire from there.

The problem for India is that its international border is very large. We cannot create such a shield on such a large scale. Yes, with the help of technology, these drones can be flown even before they attack.