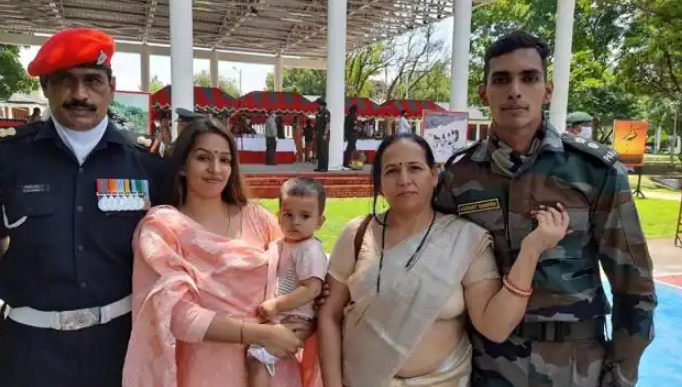 In June 1999, when the Indian Army was taking on the enemy on the Kargil front, a mother admitted to Delhi Army Base Hospital and was dreaming of enlisting her child in the army. In this turmoil, the mother who was suffering from pain gave birth to a son. On Saturday, that son made her mother’s dream come true.

Vikrant Sharma, who became a lieutenant in the passing out parade of IMA Dehradun on Saturday, was born when the country’s army was fighting the Kargil war. His father Omdutt Sharma is in the Army Police, who was posted in Jammu at that time. Subedar Major Omdutt, resident of Kasan Gurugram Haryana, along with wife Sudesh Sharma and daughter Neetu Sharma joined the son’s POP.

Sudesh Sharma tells that Vikrant was growing in her womb during the Kargil war. She had resolved that if she had a son, she would send him to the army. On 13 June 1999, they got a son in the form of Vikrant. Since childhood, Vikrant got an atmosphere of military background. Vikrant also showed interest in the army. Since childhood in the house, Vikrant is called by the family as Captain Saheb.

Vikrant left no stone unturned to fulfill his mother’s resolve. If you worked hard, the destination became easy. Vikrant did his schooling from Kendriya Vidyalaya, Delhi. Her sister Neetu’s husband is also a fighter pilot in the Air Force. Father Omdutt Sharma has also been posted in IMA Dehradun.

He is currently serving in the Army Police as a Subedar Major. The father in military uniform became a part of the son’s passing out parade. The family was feeling doubly happy when Vikrant became an army officer just a day before his birthday.