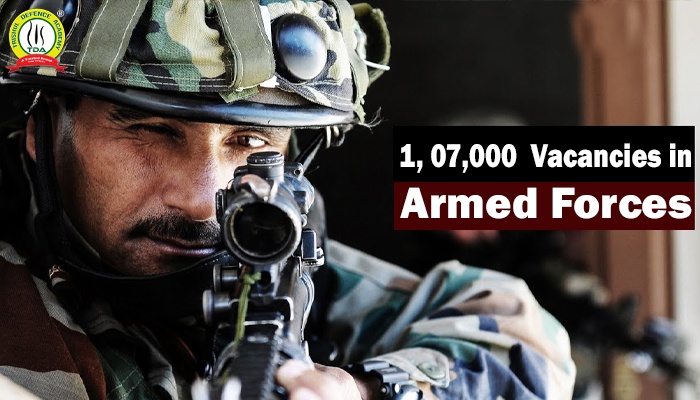 NEW DELHI: Nearly 1, 07,000 positions are lying vacant in the armed forces. The figure for vacant posts in Indian Army is at all-time high with around 86,000 vacancies. The details were provided by the Minister of State for Defence Shripad Naik while responding to queries in Rajya Sabha. As per the reply given by MoS Defence, 79,349 positions of junior commissioned officers and other ranks are lying vacant in the Indian Army while the number for officers was 6,975. Whereas, the shortage of officers against the sanctioned strength is 1,044 while the number for sailors and other ranks is 12,317 in the Indian Navy.

Similarly, the number of vacant posts of officers is 589 while that of airmen is 7,231 in Indian Air Force. The total number of vacancies in the Armed Forces comes to 1, 07,505 out of which, the highest shortage is in the Army with 86,324 vacancies.

The shortage or vacancies have been attributed to retirements, premature retirements, attrition due to casualties and injuries. However, the minister expressed confidence that the shortage of officers is in no way impeding the functioning of armed forces as recruitment is a continuous process.

While replying to another query, Naik informed that 6,796 women are working in the Army while the number in the IAF excluding those working in medical and dental streams is 1,602. The number of women employees in the Navy is 696, he added. Naik said the government has sanctioned 1,700 women in Military Police Corps in a phased manner.