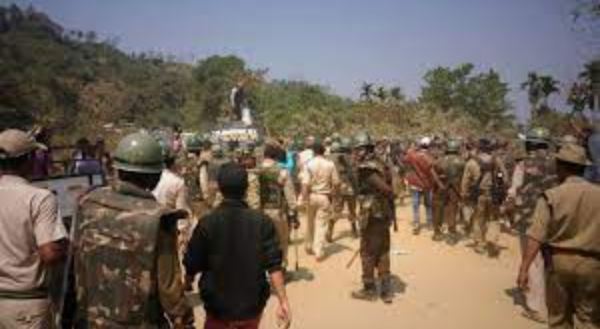 In a press conference, Assam Chief Minister Himanta Biswa Sarma has announced financial assistance of Rs 50 lakh per family to the families of the deceased police personnel and Rs 01 lakh per injured to the injured. The injured SP has been sent to Mumbai for treatment.

An official in Aizawl said that H. Lalthalangliana, Deputy Commissioner, Kolasib district, Mizoram, has written a letter to the Cachar district administration of Assam on the human rights violations committed by the officials of the Assam government and the police on the tribal people during the standoff on July 10, 2021. accused of torture.

Without any prior notice, a road was constructed from Assam to Buarchep on July 10, 2021, and the Assam authorities with the help of the police destroyed the crops of the Mizo tribe. In addition, the tribal people protesting the loss were forcibly evicted by the Assam Police personnel.

• On July 11, 2021, at around 02.40 hrs, Mizoram Police Forces heard two loud blasts at Saihapui V village on the border and Buarchep on the Assam border. A criminal case was also registered in this connection under the Explosive Substances Act at Vairengte police station in Mizoram.

• This Mizoram-Assam border dispute has been going on since the existence of Mizoram first as a Union Territory (UT) in 1972 and then as a state in 1987.

• During the British period, Mizoram was a district of Assam called Lushai Hills.

• The Mizoram-Assam border dispute pertains to the following notifications passed during the British period:

(i) The Lushai Hills (now Mizoram) was demarcated from the Cachar district of Assam through a notification of the year 1875, derived from the Bengal Eastern Frontier Regulation (BEFR) Act, 1873.

(ii) Demarcation of Lushai Hills and Manipur was done through notification of the year, 1933.

• On the contrary, the Government of Assam follows the notification of the year, 1933.