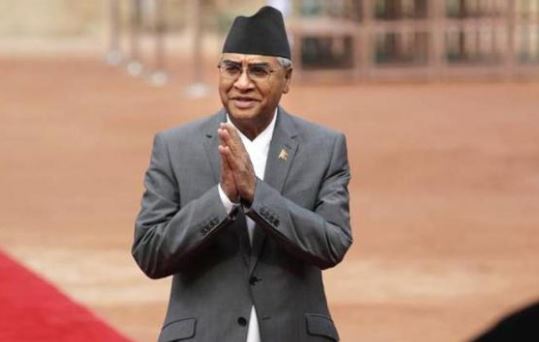 Nepal’s newly appointed Prime Minister Sher Bahadur Deuba won the trust vote of the Nepalese Parliament on 18 July 2021. He got the support of 165 members in the 275-member House of Representatives. Deuba was appointed prime minister by the Nepalese Supreme Court and asked to prove the trust vote in a month.

83 MPs voted against the newly formed government. In this way the government easily proved its majority in the Parliament. The House of Representatives of the Parliament has 275 members. Prime Minister Narendra Modi has congratulated Deuba on winning the trust vote.

Deuba was sworn in as the Prime Minister of Nepal for the record fifth time on July 13. A day before this, a five-judge constitution bench headed by Chief Justice of the Supreme Court Cholendra Shamsher Rana ordered the restoration of Parliament for the second time within five months. The Nepali Congress has 61 members in the lower house of parliament, while its coalition partner Nepali Communist Party (Maoist Centre) has 48 members.

Congratulations Prime Minister @DeubaSherbdr and best wishes for a successful tenure. I look forward to working with you to further enhance our unique partnership in all sectors, and strengthen our deep-rooted people-to-people ties.

India’s PM Modi has congratulated Nepal’s Prime Minister Sher Bahadur Deuba on winning the trust vote. PM Modi tweeted that congratulations to Prime Minister Sher Bahadur Deuba and best wishes for a successful tenure. I am looking forward to working with him. Deuba is considered pro-India. This is the reason that with his becoming the PM, relations with India are expected to strengthen.

Nepal’s House of Representatives has a total of 275 members. Of these, 271 were to be counted. Deuba needed to get the support of at least 136 members. Had he failed to win the vote of confidence, Parliament would have been dissolved and elections would have to be held in the next six months.

The biggest challenge before the new Prime Minister of Nepal, Sher Bahadur Deuba, is the corona epidemic. The danger of corona is increasing day by day in Nepal. Due to lack of oxygen and medicines, there is also a significant increase in the deaths due to corona.