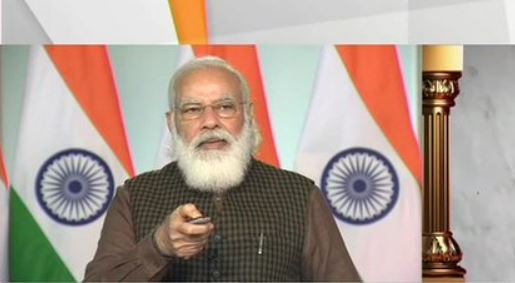 Prime Minister Narendra Modi laid the foundation stone of the All India Institute of Medical Sciences (AIIMS) in Rajkot, Gujarat, through video conferencing on 31 December 2020. He said that this will help in improving the health infrastructure in Gujarat.

Prime Minister Modi while addressing the program said that this year has been full of challenges. This is the last day of the year to remember India’s millions of doctors, health warriors, sanitation workers, working in drug stores, and other front line corona warriors. PM Modi said that the year 2020 is going to teach us that health is wealth.

PM Modi assured that preparations are being made for mass vaccination next year amid growing concerns after the introduction of new strains of Coronavirus infection in the country. He said that cases of Kovid-19 are decreasing in the country now and we are ready for the world’s biggest vaccination program next year.

PM Modi said in his address that even after so many decades of independence, only 6 AIIMS were able to be built. In the year 2003, the government of Atal ji had taken steps to create 6 new AIIMS. The year 2012 was made when he was making them, that is, it took 9 years. In the last 6 years, work has been done on making 10 new AIIMS, many of which have started work today.