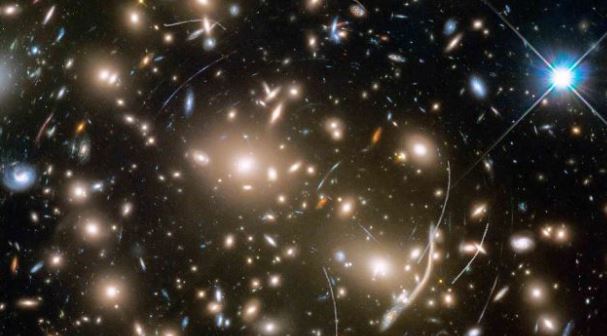 On January 19, 2021, the National Aeronautics and Space Administration (NASA) shared a stunning photo of the giant galaxy cluster – Abell 370 – on its social media account. This picture is the first in itself, as it shows a huge cluster of galaxies.

The Abel 370 galaxy cluster is located 4.9 billion light-years away from Earth in the constellation Setus. NASA reported that the strange shapes seen in this image are distorted forms of galaxies that are not part of the cluster but are located next to it. These distant skies look distorted due to the immense gravity of this galaxy cluster.

According to Albert Einstein’s general theory of relativity, gravity can change not only the form of physical objects but also the form of light. By this, the light from a distant galaxy travels towards us, through the Abel 370 galaxy cluster, the gravitational force of the Abell cluster bends this light and increases the light of these distant galaxies like a lens. This is called gravitational lensing.

Abell 370 is one of the first galaxy clusters to show the effects of gravitational lensing. This particular image for the survey has been taken by Hubble’s advanced camera. This exposes many of the scattered ridges and arcs/curves in far more detail than the telescopes on the ground.