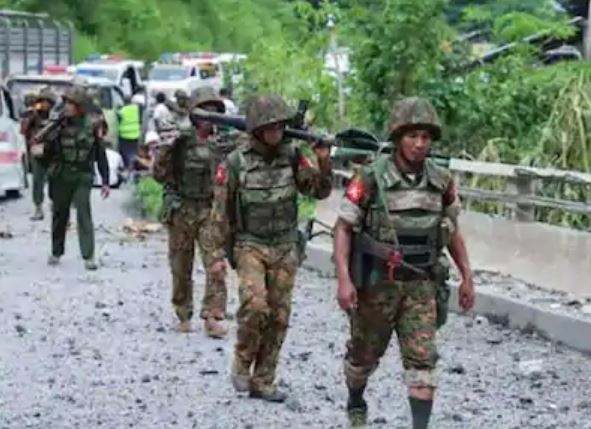 Army of Myanmar (Military Coup in Myanmar) has taken the power of the country under its control under a year of emergency. After all, what happened was that after ten years of being away from power, the army once again strangled democracy in Myanmar. Let us understand some possible reasons for the military to control the power.

Mayawadi TV, owned by the army, cited Article 417 of the country’s constitution, which allowed the army to take over power in an emergency. The presenter said that the crisis of coronavirus and the failure of the government to hold the November elections are the reasons for the emergency. The army drafted the constitution in 2008 and under the charter it made a provision to hold power in the hands of democracy, civilian rule. Human rights groups called this article a ‘system of possible coup’.

In the constitution, 25 per cent of the seats in the cabinet’s main ministry and parliament are reserved for the army, which limits the power of the civilian government and it refuses to amend the charter without the support of the army. Some experts wondered why the military would reverse its powerful status quo, but some others attributed the near-term retirement of Senior General Mein Aung Hlaing, who has been the Commander of the Armed Forces since 2011.

Aung San Suu Kyi’s party National League for Democracy won 396 of the 476 seats in the parliamentary election held in November. The results have been confirmed by the Central Election Commission. But shortly after the elections were held, the army claimed that there were lakhs of errors in the voter list in 314 cities, so that voters may have voted several times or committed other ‘election frauds’.

Jolife said, “But they did not show any evidence of that.” The Election Commission last week denied the claims and said there was no evidence to support these allegations. On the very first day of the new parliament after the election, the army was overthrown. Suu Kyi and other MPs were to take the oath of office but were taken into custody. It was later announced on ‘Mayawadi TV’ that the army would hand over power to the victor after the end of a year’s emergency.

Communication services in the country came to a standstill by morning and afternoon. Internet and phone services are closed in the capital. Internet services are also disrupted in many other places of the country. In the country’s largest city Yangon, roads were blocked by barbed wire and the army is stationed outside government buildings like City Hill. A large number of people reached ATMs and food vendors, and traces of Suu Kyi’s party National League for Democracy were removed from some shops and homes.