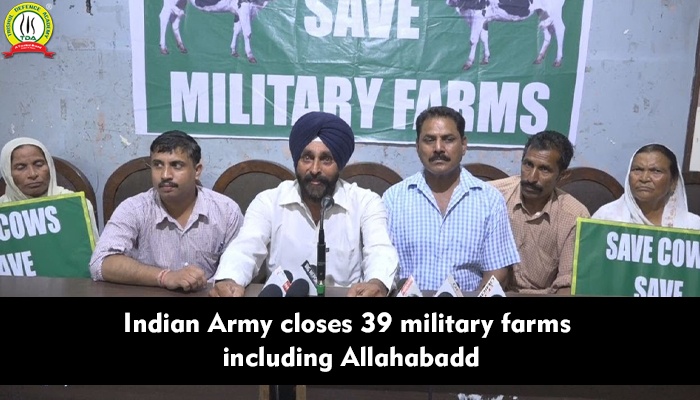 PRAYAGRAJ: After a service of 132 years, the Indian Army’s Military farms were disbanded on Wednesday, leading to the shutting down of 39 such farms across the country including Ambala, Kolkata, Srinagar, Agra, Pathankot, Lucknow, Meerut, Allahabad, and Guwahati. The farms were set up by the British Army for the production and supply of fresh cow milk to troops located in various garrisons across India.

Shailendra Pandey, Wing Commander, Public Relations Officer, Ministry of Defence, Prayagraj during a free-wheeling chat said, “After serving for almost 132 years, the military farms ended their services on Wednesday. The military farm was established on February 1, 1889, in Allahabad, now Prayagraj. Till the year 1947, the number of farms went up by 130. They were highly beneficial for us as the White Revolution had not begun. Verghese Kurien started Operation Flood in 1970. The military farms had been a big contributor to the promotion of dairy farming, which has helped the army provide milk in inaccessible areas of the country. The cattle stock includes thousands of high-yielding Frieswal cows, a cross between Dutch Holstein Friesian and Indian Sahiwal breeds. For this commendable work, I congratulate the members of the military farms on behalf of the Army Chief. Today the flag was taken down which is a very emotional moment for all of us. This flag will be installed in the army museum with the history of military farms.”

“The contribution of military farms will never be forgotten. Now milk is available everywhere, so it is being closed now and there has been a lot of expansion of the army, now we will use this land properly. All cows have been offered to the states and the people working in the military farms have been assigned to other departments,” he added before signing off.