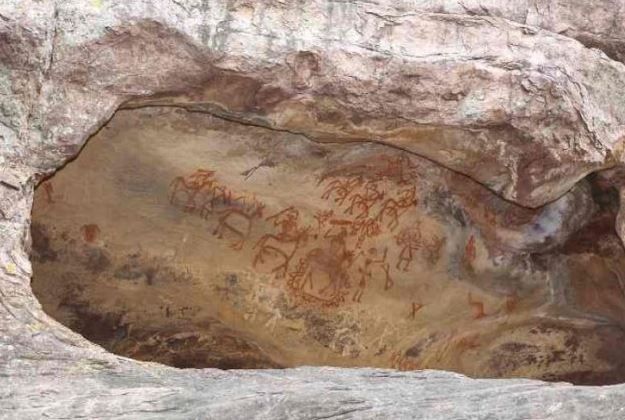 Researchers have discovered the world’s oldest animal fossil in UNESCO’s protected area Bhimbetka, about 40 km from Bhopal, Madhya Pradesh. The fossil of the animal found on the roof of the auditorium cave of Bhimbetka is about 57 million years old.

Its name is Dickinsonia and for the first time in the country fossils of this animal have been found. This was found by chance in the researchers at Jeevamsa Bhimbetka. International geologists who visited here last year were eyeing a fossil and they tested it internationally by taking a picture of it. It was discovered that this fossil belongs to the first organism of the Earth.

This was found by chance in the researchers at Jeevamsa Bhimbetka. The first two researchers of the 36th International Geological Congress to be held in March 2020 went on a tour to Bhimbetka. During this time, he got an eye on the petite figures. It was present above the rock at a height of 11 feet from the ground and looked like a rock art.

The researchers’ findings have been published in the February issue of an international journal called Gondwana Research. According to the researchers, fossils of Dickinsonia can grow up to four feet. The fossil found in Bhimbetka is 17 inches long.

This fossil, found in Bhimbetka, has been confirmed to be the oldest animal on earth, Dickinsonia, in South Australia, after matching it with the 541 million year old fossil of this animal. Therefore, it can be said that the fossil of Dickinsonia present in Bhimbetka is the oldest in the world. Fossil rocks were first discovered in Bhimbetka 64 years ago. Since then, continuous research work is going on here.