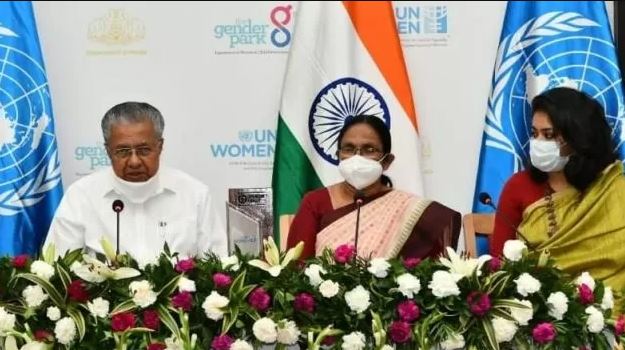 The government of Kerala and the women of the United Nations have decided to cooperate to establish the country’s first gender data hub. For this purpose, an MoU was signed on 21 December 2020 in the presence of Kerala Chief Minister Pinarayi Vijayan.

Prior to the signing of this MoU, officials of the United Nations Women’s Organization, Kerala Health and Social Justice Minister K.K. A meeting was held with Shailaja at the United Nations House in Delhi to discuss the broader structure of this cooperation.

The Gender Hub presents the goals that were established through an international conference on gender equality in November 2015. These goals were to collect more nuanced data, analyze and present this data for policy making and use this data in such a way that women have rights at the center.

Agreements were exchanged between United Nations Women’s Organization and Kerala State Government officials for the launch of several ambitious projects where capacity building and project development at UN Women’s Gender Park for the empowerment of women in South Asia Will do.

According to the Chief Minister of Kerala, this collaboration will help to deepen and broaden various pioneering initiatives for gender equality and women empowerment initiated by Gender Park in Kerala, an autonomous body under the state government by the Department of Social Justice of Kerala, Gender Started through the park.

Chief Minister Pinarayi Vijayan further said that, the government aims to invest in policy and socio-economic initiatives for gender equality, where it will act as a South-Asian hub with women of the United Nations, for gender-related activities. Gender Park will work.

Talking about her cooperation, UN Women Deputy Representative, Nishtha Satyam said that, we are also equal to realizing the agenda 2030 and to end the gender gap to achieve the goals adopted Have come together as partners.