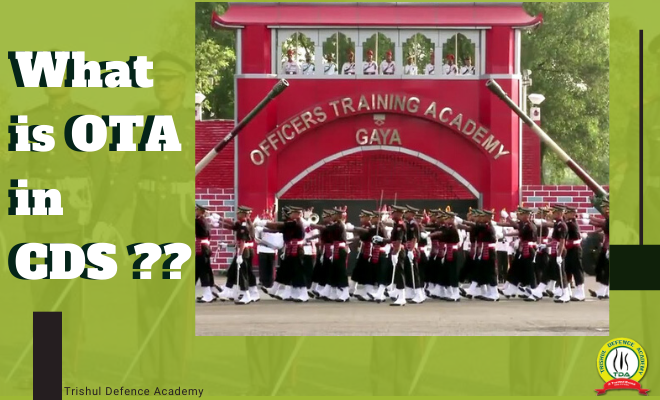 The exam is held usually in February and September. Many candidates appear for this national level defence entrance examination.

In the very first stage i.e. the written examination, candidates who fill choice as Indian Military Academy, Indian Naval Academy and Air Force Academy, will have to attempt 3 papers- English, General Knowledge and Mathematics and those for OTA have to attempt 2 papers- English and General Knowledge. The second stage of CDS i.e. the SSB Interview takes 5 days to get completed.

In the medical procedure of Services Selection Board (SSB), following medical standards are kept in mind:

What is OTA in CDS?

OTA or Officers training academy is a military academy similar to IMA and NDA. Ota, Chennai is a training academy who trains officers and commission them in Indian army. It is the only academy which is open for both male and female candidates through CDSE. Whereas, OTA Gaya is meant to train the cadets of 10+2 TES and SCO entry Army in their pre-commissioning training.

For a Cadet with no military background, things will seem very unsettling from day one. The entire aim of training is to break the sense of self, ego, which you have thought yourself to be.

Training in OTA is tough, fast; with no mercy. It is full of egoistic seniors, moody officers, and killing weather. You’ll be treated mercilessly so that you can become physically and mentally strong. An outsider thinks life at Officer Training Academy is a cakewalk but the cadets struggling inside know the real pain.

Life in OTA for male cadets and lady cadets is almost the same.

Daily schedule of cadet’s training at Officer Training Academy is decided prior the term starts and the same is followed till the end.

The day begins at 5:30a.m for the morning roll call, in other words the fall- in, followed by a outdoor training (P.T). After that they get a short break of 40 minutes for breakfast. One will get the breakfast only if he/she is in a proper uniform.

After the breakfast, they rush to attend the classes with a minute.

Sharp at 1:30p.m cadets will have their lunch. Generally afternoons are for rest followed by games from 4-6p.m. After which cadets have to fall- in for the evening roll call.

Later in the evening you have to study for an hour before going for dinner.

Things are very scheduled and routine is hectic. Once you are in the grid you’ll enjoy it.

There is no place of leniency in the discipline in OTA. That’s why whenever a cadet commits anything which is against the rules they face punishment or “Ragda”. This not just includes running, push ups but much more than this. It basically is the dreadful punishment in the academy which the cadets have to faces.

The training will keep you occupied and you will not even remember which week or day it is. Your course mates will become your closest friends. Slowly the academy will catch on to you and these days will forever be the best days of your life.