First of all Let Us Understand what is Airman.Airman is one who is just below Officer Rank and it is equivalent to a Soldier Grade of army and Sailor Grade of Navy.Airmen are basically of two types, One with Technical Background as in they have knowledge of Physics and Maths in 10+2 known as Group X and the other Known as Non Technical as they have any Background of Any Subjects in 10+2 known as Group Y

Ranchi being a Capital of Jharkhand has huge Potential for Coaching Centers.Because of Presence of Few of the Best Colleges in Ranchi,and few of the Best Schools Ranchi is now a Educational hub. Students across Jharkhand Come to Ranchi to per sue their Dreams.Defence as a Career are one of the Most Promising Career. With Respect,you tend to get Adventurous Life and Monetary benefits as well makes you  happy and content.

But In today’s scenario students who want to make career in Indian Army, Navy & Airforce are confused from where they should take coaching For Joining Armed Forces .This was the basis of Trishul Defence Academy Opening Up in Ranchi

As we know that there are three options while applying. There are various exam pattern for Air Force X & Y & Both group. The examination pattern of these groups is following-

For Group X& Y Both

As it is discussed earlier defence forces demands certain level of physical fitness. For ensuring this Indian Air Force has formulated a physical fitness test which is given following-

Adaptability Test-I is basically the test of Situation Reaction ib which takes place just after the PFT if a candidate qualifies PFT. In this test decision making ability, Problem solving attitude, right mind set up is assessed. There will be 45 SRTs which a candidate has to complete within 30 minutes. These SRTs will be objective type and bilingual.

Once the candidate clears the Adaptability test-I he goes through the next test which is known as Adaptability test-II which is basically the test of Group discussion. In this discussion a group comprises of some 10-15 candidates who are made to sit in a semi-circle and assigned a topic which is of basic in nature. The topics range from current affairs to social events. This test is basically to check the knowledge, communication skill, interpersonal Skillsand convincing power of the candidate. A little bit of preparation and practice proves very handy for doing well in this test.

After all these above examinations candidates are given green cards with the dates and venue of the medical examination which generally takes place after 2 months.

It does not matter how slowly you go as long as you do not stop.With this Quote in Mind,Come and Join Trishul Defence Academy which is the Best Airforce X/Y Coaching in Ranchi 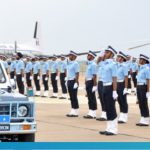 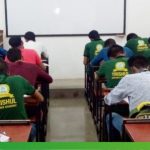